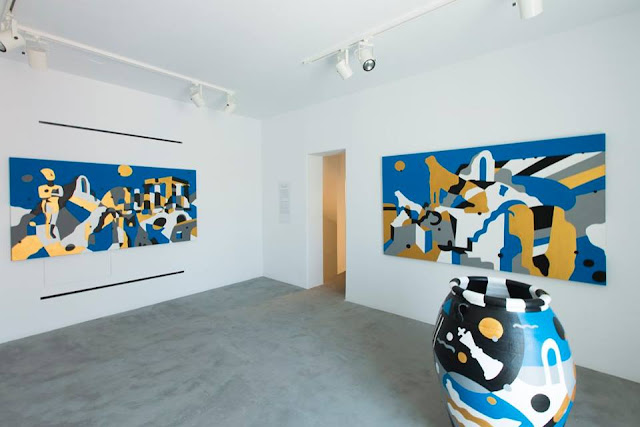 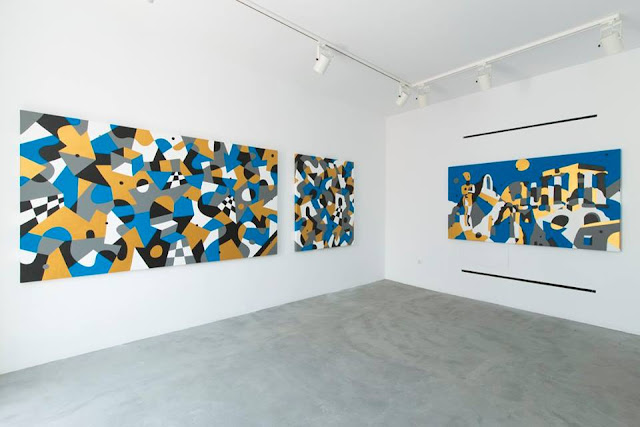 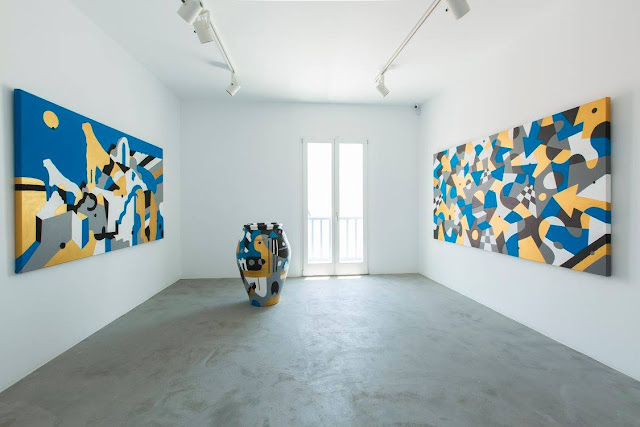 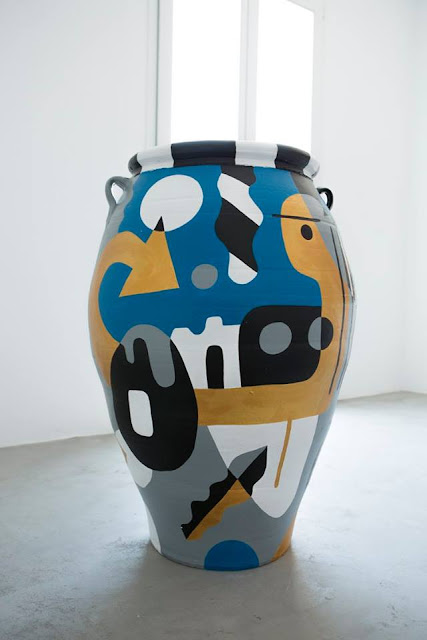 Dio Horia is pleased to present an exhibition by Cacao Rocks, this marks the artist’s first solo presentation in Greece. As a multifaceted artist who utilizes painting, street art, film and sculpture, Cacao Rocks works within the parameters of figuration and abstraction as a means to depicthis state of mind and record his impressions.
Les Cyclades Electroniques records in painting the artist’s visual diary during his travels around the Cycladic islands: the robust Cycladic architecture, the rich colors of the Greek sea, the force of the winds and the brightness of the Aegean sun. He conveys his readings during these trips with the poems of Elytis and Seferis and the French electronique music that accompanied him. In a broader and more personal scope, these paintings also grapple with artists own feelings of misplacement. As the son of a Greek father and of a French mother, the artist struggles with finding his own roots, while simultaneously attempting to establish more firm emotional roots in his personal life.
In congruency with his practice, Cacao Rocks adds and deducts colors and patterns in his paintings through a calculated praxis. The acrylic paintings presented in the gallery represent both a continuation of this practice while also drawing on his first approaches to painting as an art student, making paintings from negatives of pictures he took. During his trip at the Cyclades he went back to these negatives as their color palette (blue, gold, black and white) was similar to what he was experiencing in the Cycladic imagery.
The artist also drew inspiration from an older series of photographs of Greek landscape paintings he made while living in Germany. Cacao observed how the colors of his paintings changed position - black touches turned to white and gold colors exchanged places with blue colors. Particularly interested with this composition, he decided to create an entire series of work dedicated to it. The resulting patterned canvas seem to echo with the rhythm of electronique music.
The finalized works presented at Dio Horia transcend narration in their structure. The artist is not interested in creating an image for the Cycladic islands, but rather to visually record the nuanced vibrations of his experiences. The resulting body of work reveals the non conventional nature of his everyday life, his memories and his surroundings.
Νεότερη ανάρτηση Παλαιότερη Ανάρτηση Αρχική σελίδα